The "Daily Gazette" (or Newspaper) is your main hub of information about the game and what is happening in your absence. Make sure to check it regularly to keep track of building constructions, official government statements and war casualties. In addition, you will find useful statistics about the game round, a list of hotkeys and much more.

The Daily Gazette is published once per day and always shows the current date (you can check it on the top right). However, you can browse through past entries using the arrows on the top left or by just entering the respective day number manually. The top half of the newspaper also shows you the following crucial game information. The bottom part of the newspaper consists of articles that are of different origin: some are automatically generated by the game system, some reflect current diplomatic, military or economic incidents on the map, other are composed by actual players and used for diplomatic communication and role-playing. Among the automatically-generated messages are the following:

- reports about revolts and uprisings

- reports about trades and changes in diplomatic status

Keeping an eye on these reports is crucial for understanding the occurances on the map and help explain drops in morale, malfunctioning buildings, or 'disappearing' troops. 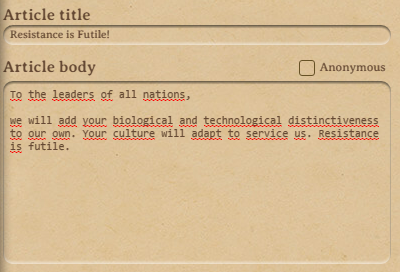 The "write article" button gives you the possibility to write articles, which will then appear directly in the Daily Gazette. This can be a strong diplomatic tool, articles published from there can be read by all players. However, choose your words wisely: Published articles can have serious consequences, so try to avoid insulting or exposing other nations or their leaders.

Should you find yourself in the possession of classified information you still want to inform the other players about, you can hide your identity by sending the message as 'anonymous'. Such articles will not be published as an official government communiqué and their origin concealed.