New World Empires features a roster of 24 different units (including ships) from the three branches: Warfare, Economy, and Colonization. Each unit type offers a set of unique features with regard to speed on different territories and strengths or weaknesses in combat with other units (or terrain). Also, civilian units like the Administrator or Colonist serve special purposes (like upgrading provinces and establishing colonies).

In order to decide which unit to recruit and bring to battle you will have to make yourself familiar with unit costs and requirements, their different battle properties, their state and behavior on different terrain types, and the available commands.

Depending on whether you set your focus on warfare, economy or colonization (see "The Basics"), your unit production will focus on different types of units to support your strategy.

While you will generally try to max out the unit type that matches your chosen focus, adding units from other branches to the mix will make you more flexible and help you respond to your opponents strategies. You can look up the unit types and costs as well as their advantages on different terrains in their respective info screen. 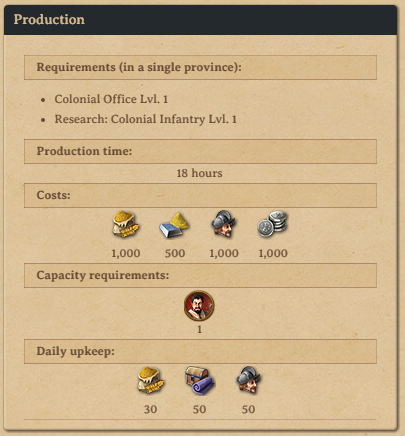 In order to recruit units, certain requirement must be met:

(1) Most units need to be researched first to be recruited at a certain level (see “Research”). Also, they may only be recruited in certain buildings.

(2) Each unit requires a certain amount of resources to produce. These systematically differ between unit types.

(3) Each unit takes a certain amount of time to produce. (This time can be reduced by leveling up the buildings that produce them.)

(4) Each non-civilian unit counts towards your maximum capacity of military units. (This cap can be increased through research and certain buildings.)

(5) Each unit comes with a daily upkeep that has to be afforded in order to keep the unit at full strength.

button in the research tab.

To decide which units to bring to a battle you should be aware of their respective battle properties.

The exact values (both for attacking and defending, see "Combat") can be found in the battle properties table in the unit info.

Hint: While all units adhere to the general rock-paper-scissors model described above, some follow it more closely than others. Make sure to check each units strengths and weaknesses to set up your army in the best possible way.

Finally, your units stats are relevantly effected by the terrain of the province in which they fight. The terrain information table in the unit info tells you on which terrain they perform best. While the number of hitpoints is stable across terrains (excluding water for land units) both speed and attack power either suffer a -25% or -50% penalty or are boosted by +25% or +50%.

When clicking on a unit you may choose between 5 different commands. These can be applied both to single units and stacks of units.

You can issue commands by selecting a unit, clicking on the respective button and then selecting the target army or province. Alternatively, you can drag-and-drop units to issue either a movement or an attack command (depending on the target).

If your units cross paths with the army of an enemy player you are at war with (or when its way passes the main city in a hostile province) it will start fighting. If your army wins the fight, the remaining troops will execute the previously given command and resume moving into the original direction. If you and your ally attack a province, the army that fails to get the province first will cancel their attack.

See the next chapter "Combat" for details on how combat is resolved.