On your path to military, economic or imperial supremacy you will almost inevitably have to engage in military conflict. The following chapter gets you started on the basics of combat and how it is resolved.

Typically, combat is inititated in one of three cases:

(1) you issue an attack command to an enemy province capital or army (either via point-and-click or drag-and-drop);

(2) your armies are attacked the same way and defend themselves;

(3) your army crosses path with a hostile army, or when passing the main city in a hostile province.

Note: If your army wins, the remaining troops will execute the previously given command and resume movement in the original direction.

Combat is resolved turn-based with one attack action per hour (also known as a 'combat tick'). You can check the remaining time before the next combat tick by hovering the mouse over the attacking unit.

Both units/armies attack at the same time using their respective attack or defense stats. These values are influenced by (1) terrain, (2) unit morale, and (3) target unit type. 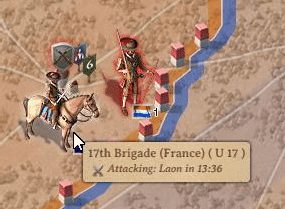 Example: In the example on the left, a French Light Regular Cavalry Lvl. 2 is attacking a Dutch Light Regular Infantry Lvl. 2. Fighting in a forest province, the Cavalry attacks with a base attack value of 2 against Infantry (no terrain modifiers are applied).

Also, this particular Cavalry unit is at 75% morale, which will minimally decrease its actual attack power. Finally, a random factor (also known as the 'X factor') modifies the result to make combat less predictable. When dealing damage the resulting attack power is subtracted from the defending unit's health, thus decreasing its morale.

At the same time (i.e. once per hour), the defending Infantry unit also deals damage to the attacker: profiting from a 25% terrain bonus in forests, the Lvl. 2 Infantry will deal 6.25 damage (base damage 5 + 1,25 bonus damage in forests) to the attacking Cavalry - again modified by a random factor. Each hour, the damage will be calculated anew (based on the current morale/health of the units) until one of the armies is destroyed.

The unit info shows an estimated overall strength based on their maximum attack power. It doesn't factor in target unit type but still includes terrain and morale penalties and bonuses.

When stacks of units attack each other, the added damage of one army affects only one unit of the other army. Thus, units will fall one by one. The excess damage per combat tick is applied to the next unit in line.

When you issue an attack command on a player with whom you are currently not at war, a pop-up will notify you that this will change your diplomatic relation to that player (see "Diplomacy"). Diplomatic relations are directly affecting the behavior of your troops, causing them to peacefully pass other armies or attacking them when encoutering them on the map.

E.g., when you are at war with a player, your troops will always attack their troops. Also, if your troops are encountered on another player's territory, that player's army will take you for an intruder and attack. This happens if your diplomatic relationship is either war, trade embargo, or peace. Setting your relation to right of way, shared map, or shared intelligence will prevent defensive actions by the other players' army.

Note: "Peace" just means that your armies won’t automatically start an attack when in range of other armies.