New World Empires is as much about diplomacy as it is about armed combat. Since you cannot afford to support multiple frontlines at once, you will have to entertain diplomatic relations with other players. These can be managed via the Diplomacy screen found on the top left of the screen.

The Diplomacy window is divided into two parts labeled Information and Messages & Trades.

Information shows a list of all countries in your game and some useful information like the number of provinces they control, the number of Victory Points they have gathered, their status, your diplomatic relation and an option to get in touch through the in-game messaging system. 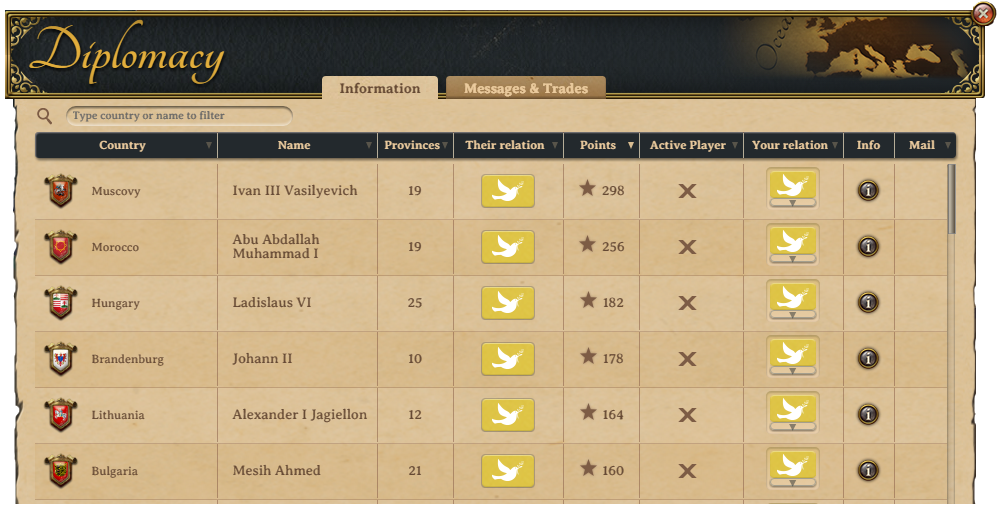 You can sort the list by each category to get a better overview about what is going on in your round.

The Activity status, for example, is useful to identify whether a player is active (✔), inactive (❍), or run by the AI/computer (✖). If a human player stays inactive for 3 days, the AI takes over until that player returns to the game.

Changing your relation to a player can be easily done by selecting the respective relation from the drop-down menu under Your Relation.

Note: Some relations have to be confirmed by the other player in order to be activated.

In total there are 6 diplomatic status between countries. By default, peace is the initial condition and can be changed at any time by both sides.

Note: Countries that are controlled by the AI do not actively engage in diplomatic activity (like declaring war or imposing a trade embargo). However, they respond to your actions: If you share Right of Way, it will probably also be offered to you after some time. The Elite AI differs from the regular AI in being hesitant about such changes, though. Also, it tracks your diplomatic and military activity and offers/refuses relations based on your reputation: If you have a good reputation the A.I. will grant you right of way, but if it is low it may declare war.

In addition to the information found in the Diplomacy screen, you can select a second tab: Trades & Messages. Here you'll see all countries with which there has been a diplomatic exchange as well as the messages and offers sent between those countries and yourself. As soon as a new message or a new offer arrives, you will receive a notification on the main screen. 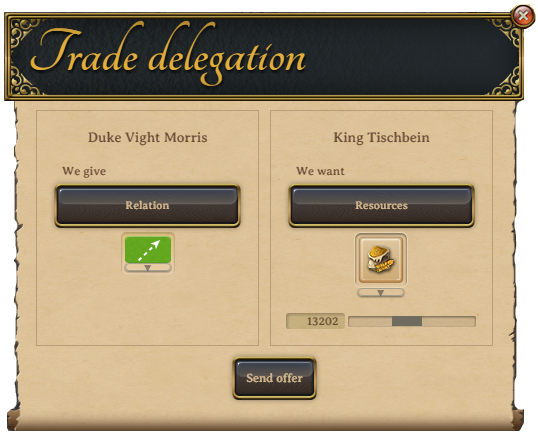 In contrast to the Market (see "Market and Trading"), the Trade system allows you to trade directly with other human players. To trade, click "Start a new conversation" and "New Trade" to select your offer and the expected return:

- Relation lets you trade all relations except for "at war".

- Province lets you trade any of your provinces.

- Explored map lets you trade all exploration information that is at least 5 days old.

Trading can become a crucial aspect when teaming up with players or solving diplomatic crisis. Make good use of it to further your diplomatic or military causes.